This is a new work in progress, The Manifesting Love Club. Four friends. All single. Some looking for love. Some not. Join these ladies as they take their friendship into a new direction, to manifest love.

Earlier, Heather introduced her idea of affirmations to manifest love. When her path crosses a handsome fellow – wearing a clown nose in public – she couldn’t be less interested. Even if he is the brother of a work associate across the hall. But he’s persistent.

This week we’re writing to the prompt ‘write.’

Return to TUESDAY TALES to read the rest of the story snippets.

Instead of a hot date with her pillow as expected, a few hours later Heather found herself parked at a table at the local comedy club.

Her mind drifted to her friend’s proclamation about the newest wonder guy in her life. She’d tried calling Corecia back before she left the house. To her dismay, it only rang and went to voice mail. Heather knew that Corecia’s phone was a permanent extension, always in hand or on the table in front of her. So if she didn’t answer, she must be doing the hot and heavy with the new guy. After hearing her pal’s enthusiasm about the affirmations, she couldn’t wait until she talked to her and heard more about her experiences and how she’d met this new guy. Especially since Corecia claimed that she hadn’t met him at a club. That in itself was a remarkable step forward.

A round of applause brought her attention back to comedian on the stage. She wondered what she’d missed as her mind wandered. She doubted she’d missed much. So far the fellow performing wasn’t anyone she’d make an effort to see again. Oh, he tried, she’d give him that, but as far as making her laugh, he fell far short in that arena. He got an ‘A’ for effort, but not for results. She hoped that when Brian’s turn came up, he was as funny on stage as he was in person.

Half-hearted claps signaled the end of this performer’s fifteen minutes of trying to woo the audience. As if summoned by her thoughts, Brian was the next one to step out on stage. Heather had wondered if he’d appear with his favorite clown nose perched in the middle of his face. He didn’t. Evidently, he saved that for his children’s shows. The dapper young man in the navy linen shirt over freshly pressed khakis wouldn’t be mistaken for a comedian out trolling for laughs. Until he opened his mouth.

The crowd responded to his routine with hoots, hollers, and genuine belly laughter. The lines rolled off his lips with a blasé casualness that Heather knew by now was anything but casual. He’d heard him studying his lines and working on the timing of jokes. She knew that hours of careful work went into his skit. She laughed so hard that she clutched her sides.

The laugh caught in her throat when she heard these words come out of his mouth. “So, you know what happens when the guy with the clown nose runs into a gorgeous blond at the snack machine?” 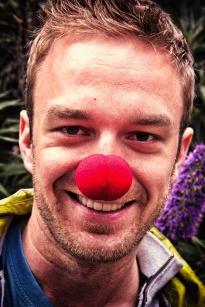 s he described a buffoon of a guy running around in public, complete with clown nose and clown car, the audience roared. When he talked of the disdain the beautiful girl showed, Heather wante
d to curl up and die. She hadn’t realized that he was totally serious about using real life experiences as material.
When he pulled the infamous red bulb from his pocket and stuck it smack dab on his nose, the group cheered. He winked at Heather before uttering his final line. “But, ladies and gentlemen…write this down…the clown always gets his girl.”

As the applauding audience stood and gave Brian a standing ovation, Heather joined them. Everyone had enjoyed his routine so much, she decided that she’d forgive him for talking about how they met.