Today, for ‘V’ in the A to Z Blog Challenge, Jillian Chantal takes sends us to an international world with a little suspense and a lot of love in her book, Venetian Masks.

American oil painter Charlotte Bolling travels to Venice, Italy to study the architecture of the old city and paint. She meets Vincente Canaletto, an Italian man who owns a water taxi and gondola business. Charlotte ran away from home at age thirteen when her mother, who was a madam in a house of ill repute, offered Charlotte’s virginity to the highest bidder.

Vincente’s son was abducted and Vincente’s been on a quest to find him for years. When the boy is located by an investigator in Bangkok in a bordello, Charlotte insists on accompanying Vincente to the capital city in Thailand since she believes her own past will be invaluable in winning the child’s trust. They embark on a dangerous rescue mission in the back streets of that city. 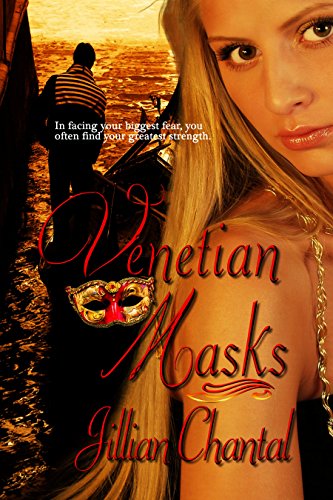 The next morning after having slept as if she were in a coma, Charlotte got up later than she’d planned. The jet lag had caught up to her and she overslept. She’d wanted to walk the city before dawn and get a feel for the morning light. She liked to observe and sketch for several days the areas she planned to capture on canvas. It helped to know when and where the sun rose and for Venice specifically, she wanted to know about what time the glints of morning sunlight would shimmer across the Grand Canal. That was the first thing she wanted to paint and she wanted to capture the exact right moment of sunrise.

She could hardly contain the excitement rising in her chest as she dressed for the day.

She tossed on a pair of khaki shorts and a blue shirt. She pulled her hair up in a knot and secured it with a large metal clip. She shoved some Euros and her room key in her pocket and slid on her shoes. Grabbing her sketchpad and a pack of charcoal pencils, she left her room and clattered down the stairs.

Once in the street, she turned left toward the coffee shop she’d seen on her trek across the city the day before with Guilia. She ordered a large black coffee to go along with a sugary cannoli. Breakfast had always been a grab it as you go affair for her even when she was a teen. She could count on less than one hand how many times she’d actually had a full sit-down morning meal in her life.

She took her little feast and went down to the harbor. She found a seat on the seawall and decided almost immediately that she needed to invest in one of the little stools that she’d seen other artists sitting on as they worked. She set her coffee down beside her on the concrete and studied the grouping of gondolas in front of her as she ate her cannoli.

When she swallowed the last bite, she sipped her coffee, then flipped open the sketchbook. Using the side of one of the pencils, she shaded an area that would become a few of the gondolas.

Engrossed in her work, she nearly leapt into the water when someone sat beside her and cleared his throat. As it was, her pencil skidded across the front of her drawing and left a mark.

She glared at the man beside her. “Look what you made me do.”

“Sorry. Surely you can fix it?”

“Surely that’s beside the point, isn’t it? It shouldn’t have happened in the first place. Why’d you have to sneak up on me anyway?”

“I wasn’t sneaking. I walked up like any other person. Can I help it if you’re so easily startled?” the water taxi driver from the day before swung his legs over the water.

“Aren’t you late for work? Or is today your day off?”

“Truth be known, I’m out here stalking former passengers to make sure they’re out of their rooms so I can go in and take all their property.” He winked.

“Why? You’re the one who gave me the idea. A life of crime may be more lucrative than what I do now.”

“Do taxi drivers in Italy make very much?”

“Surely not as much as criminals, right?”

You can buy Venetian Masks here.